Why a Constitutional Amendment for Life?  Why At This Time?

We, prolife Americans, have a tremendous opportunity. God has placed us in the position of ending abortion in America forever with a Life Amendment to the United States Constitution. 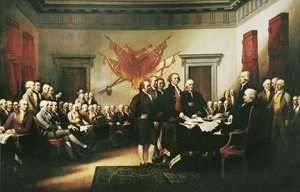 The Signing of the Declaration of Independence by John Trumbull

Background:  Prior to 1967 every state in the Union had a law against abortion, except to save the mother’s life. The logic behind these laws was that the preborn child was a full human being and should be protected by law. In 1967 several states liberalized their abortion laws, and in 1973 the U.S. Supreme Court made abortion legal throughout the nation up to term for any reason. The logic was that the preborn child is not fully a person. Now science shows that the preborn is fully human since conception (fertilization). Since that time over 60 million unborn human beings – American citizens – have been legally killed by abortion. That is a fifth of the whole American population.

Since 1971, Crusade for Life has fought for the babies. We have given talks, started pro-life groups, written and distributed pro-life literature, produced pro-life films, and sidewalk counselled at some of the biggest abortion clinics in America. We have even been arrested for blocking clinic doors, and have been taken to jail in handcuffs. We have also helped start and have assisted pregnancy help centers with their work.

All these efforts have been positive and effective, and have been extended over several decades. Other groups have similarly worked, but the sad truth is that legal abortion has not been ended in America. It is still going strong. We have wondered whether there is some other way to bring the killing to an end?

Why a Constitutional Amendment for Life? In the depths of this dilemma the issue of slavery entered our thoughts. Like abortion, it was a long agonizing problem. It too was held in place by a U.S. Supreme Court decision. But in 1865 a group of determined legislators enacted a Constitutional amendment. Thus Amendment 13 overturned the Supreme Court’s Dred Scott decision, and slavery in America was ended forever.

Why at this time? The time is ripe for a pro-life amendment to the Constitution for the following reasons:
1.  Both houses of Congress have a conservative majority and most claim to be pro-life.
2.  The Republican platform is definitely pro-life.
3.  The Constitution itself is pro-life in that Amendments 5 and 14 say “No person may be deprived of life without due process of the laws.”
4.  An amendment does not involve the President and the U.S. Supreme Court.
5.  Over 30 of the state governors and legislatures are conservative.
6.  All but about 10 states have passed some pro-life legislation.
7.  In addition recent polls have shown that greater than 50% of Americans profess to be pro-life.
8.  And now the videos exposing Planned Parenthood have come out showing how they callously cut up aborted babies to get the parts that can be sold!  This has shocked the American public causing several state legislatures to seriously consider defunding Planned Parenthood and now Congress is also planning  to remove their funding.
9.  Add to all this that the internet gives us the opportunity to communicate rapidly with the entire nation. It can be seen that this is the time for the pro-life movement to act.

Yes, the time is ripe for a pro-life amendment. If we achieve this, abortion in America will be gone forever. Crusade for Life has weighed the odds, and has concluded that with the current political situation and internet communications it can be done. Please read more about the proposed amendment in our booklet trilogy,  “Ending Abortion in America”, “How the Life Amendment Benefits America” and “Achieving A Constitutional Amendment for Life”.

What can be done? We agree that the killing of America’s preborn children is very grievous in God’s sight. If Jesus were here today he would speak for those who cannot speak for themselves, and rescue the innocent who are being taken away to death. Is the Church of Jesus Christ ready to do what Jesus would do?

Based on this concept we have launched the “The Constitutional Amendment for Life”. This amendment was foreseen by President Ronald Reagan in the Proclamation of Personhood that he issued in 1988. This proclamation has been reproduced in its entirety in our booklet – “Ending Abortion In America”.  The wording is simple and direct.

AMENDMENT FOR LIFE
SECTION 1.  As used in this Constitution, the word person shall mean and refer to any and every living human being from the beginning of its biological existence as a human organism.

SECTION 2. Congress shall have power to enforce this article by appropriate legislation.

How is an amendment passed?  There are three steps none of which concern the president, Supreme Court or the governors.
1. Find two amendment sponsors. One from the U.S. Senate and one from the House of Representatives.
2. Pass the amendment out of both houses of Congress by a 2/3 majority.
3. Pass the amendment by 3/4 of the states with a simple majority vote in their state houses.

Why not go state by state with new laws? Over 30 states have pro-life laws in place that stop some abortions. Often they are challenged and a judge will rule against the law and ultimately it will go to the Supreme Court and who knows what they will do!

Can¹t we just live with abortion? NO! Although most churches support the local pro-life pregnancy center, it is not enough. Abortion must be made illegal in our country.  Not only does the Bible state that, “The Lord hates hands that shed innocent blood.” (Proverbs 6:16-17), God removes His protection from nations that shed innocent blood! It is detrimental to society and to the whole country. (2Kings 24:1-4, Isaiah 1:15-20)

If not now, when?  Many in the pro-life movement will proclaim that they want to make abortion illegal but now is not the right time.  They say we don’t have the votes in Congress nor at the state level. This is true now but with hard work upcoming elections can make the difference – a decided difference.  It will take everyone working in their churches to accomplish a real change.
Let’s promote the idea of a Life Amendment so people will really start to think seriously about the idea. Many in the pro-life movement probably have never even considered the possibility of a Life Amendment.  This is regretable since it is the only way to really stop abortion. Some claim that education will make the difference. Yes, that surely helps but people need to see an end in sight.  Some say closing down abortion clinics will stop abortion.  Yes, hundreds of clinics have closed down BUT even larger facilities have been built in recent years by Planned Parenthood. Pro-life centers do make a difference, but only a small percentage of pregnant women ever enter a prolife center. All of these efforts have helped but until it is illegal, many feel God will not bless America. Millions of babies will continue to die and our country will suffer.

What steps are needed to pass a Constitutional Amendment for Life? The first step is to continue getting Christians to the polls as they did in 2016. It made a difference! Each church should:
1. Register voters.
2. Educate on the issues.
3. Encourage everyone to vote.
4. Encourage church members to run for local offices. For more information on what a church should do go to www.pastorsprolife.org

How to get started?  Here are some questions to ask your pastor:
1.  Can we set-up a table to register voters? (weekly/monthly) Will you encourage everyone to vote?
2. Will you educate on the issues through sermons?
3. Can we handout educational literature at tables and in Sunday School and Bible study classes as well as voter information on candidates?

Until Christians are the salt and light nothing is going to change. Please, Christian, seriously consider becoming the answer to our nations problems and not the problem.  Let’s work together to pass a Life Amendment to the Constitution.  Thank you.